What is Your Emergency Response?

In a study of emergency reactions, we’ve asked people from across the UK to discover how the British population reacts in a crisis. The results offer a comprehensive snapshot of emergency practices across the country, giving insight into how many people would offer aid to someone in need of assistance, how many know first aid, and how many would help someone who may be considering suicide. 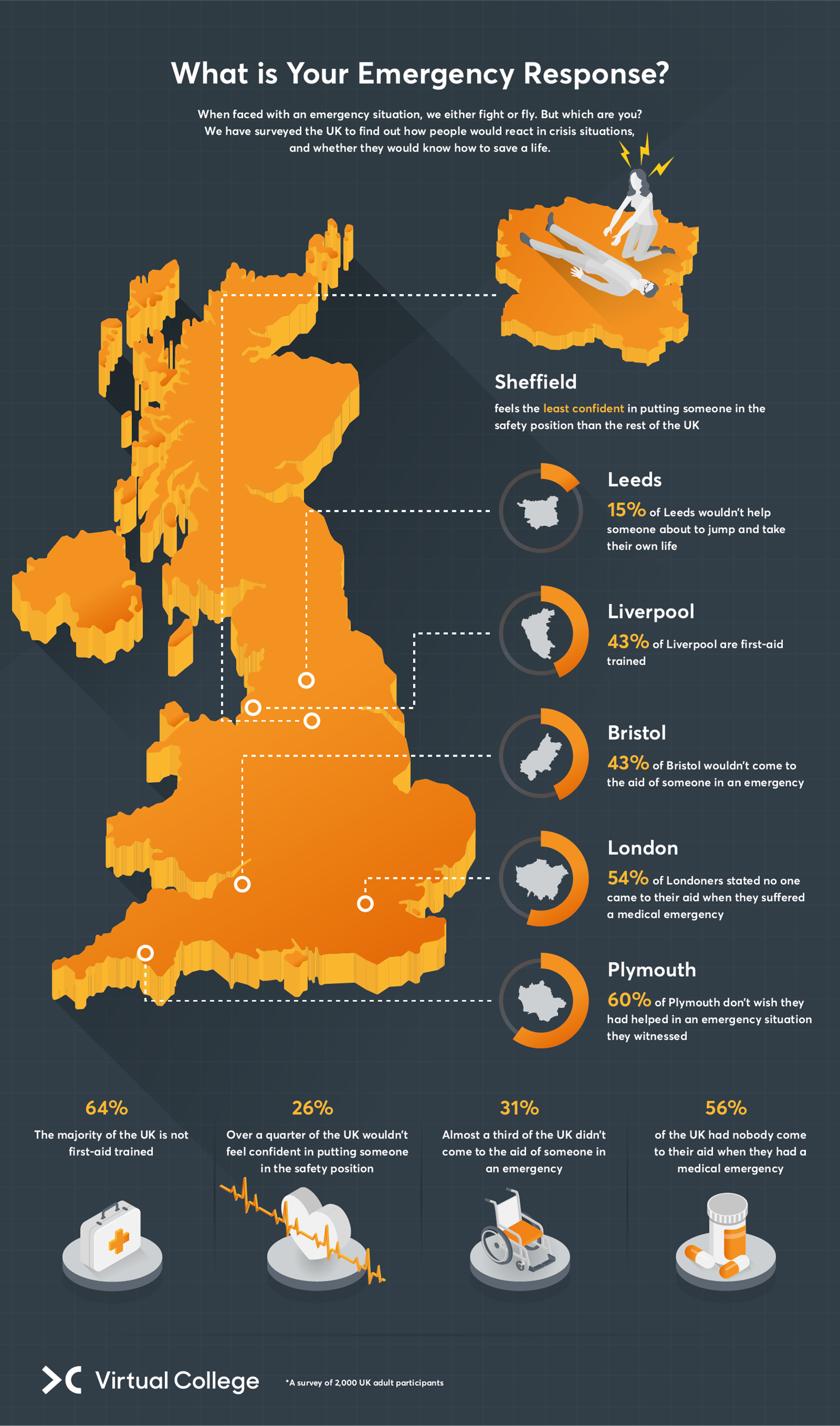 Reacting to an emergency

Perhaps the most striking result of the study is that of those who were surveyed, almost a third didn’t come to the aid of someone in an emergency. As well as that, over half (56%) of the UK, when experiencing a medical emergency, had nobody come to their aid.

The reasons given vary from thinking that someone else would help, to feeling uncomfortable offering aid. The most common reason, given by 30% of those surveyed, was that people simply didn’t know what to do to help, lacking the knowledge or training in how to assist in emergency situations.

Those most prepared in the UK to assist someone in a crisis can be found in Norwich, Brighton and Belfast where over 70% of passers-by have come to someone’s aid in the past. By contrast, the least likely people to help can be found in Bristol, Sheffield and Edinburgh where up to 43% of people said they wouldn’t come to the assistance of someone in an emergency.

When it comes to gender, more men have provided emergency aid (at 38%) than women (at 27%). By contrast, women are more likely to be helped in a medical emergency with 41% aided over 36% of men.

A different kind of crisis

As with other kinds of emergencies, a mental health crisis, involving potential suicide, is distressing, can be fatal, and often can be alleviated with the assistance of bystanders. For those considering suicide in a public place, human contact can prove to be life-saving.

Our research inquiry included questions about how people would react to situations where a distressed individual looked like they were about to end their life by jumping off a bridge.

Just over half of the UK (57%) said they would offer aid to someone who looked like they were about to jump while nearly a third said they weren’t sure if they would. The cities in which people were most likely to help included Glasgow, where 68% of people said they would provide aid, followed by Belfast at 67% and Brighton at 66%.

Are people in the UK trained in first aid?

With the knowledge that the main reason people don’t help others in an emergency because they wouldn’t know what to do, we’ve also taken a look into the statistics for first aid across the country.

It transpires that those worries about not knowing what to do are well-founded. 64% of the UK are not first-aid trained and 40% are not interested in receiving first-aid training. In terms of which city in the UK has the most first-aid training, Liverpool takes the top spot with 43% of the city knowing how to apply first aid. Second and third places go to Glasgow and Brighton with 41% each.

How to place someone in the recovery position

It’s worth mentioning that the recovery position is one of the most important first aid skills a person can have, and so in this blog, we’ve included a comprehensive guide on the process and its benefits.

If you suspect the person has a spinal injury there are some different steps to observe:

If you’d like to expand your knowledge on first aid practices and the recovery position, be sure to take a look at our online first aid course which take you not only through the application of first aid, but also the protocols of fire safety and COSHH in the workplace and beyond.