These are People's Weirdest - And Most Unhygienic Eating Habits!

We’ve all had those moments haven’t we, where we didn’t realise that a little food ‘quirk’ you had was actually really bizarre until way later than you should have?

Well, at Virtual College, we have decided to find out what the most common weirdest food habits in the UK are and shed light on just how bizarre and, in some cases, completely unhygienic they actually are…

20% of Brits put milk in tea BEFORE the water - which is apparently the correct way to do it!

Ah, the great British divide. Tea. And when making one, do you put the water or the milk in first…?

Yes, that’s right. And if that wasn’t shocking enough, one scientist’s research highlights that putting milk in before the hot water is actually the CORRECT way to make a brew. Loughborough University Dr Stapley’s somewhat bold claim is all down to the milk heating unevenly when poured into hot tea.

When the milk heats unevenly, it makes the proteins denature. This not only causes the milk to lose its flavour, but is also the culprit for the sticky skin and floaties that can form on the top of a cuppa! Putting milk in first also helps counteract hard water - an issue that plagues more than half of Britons. 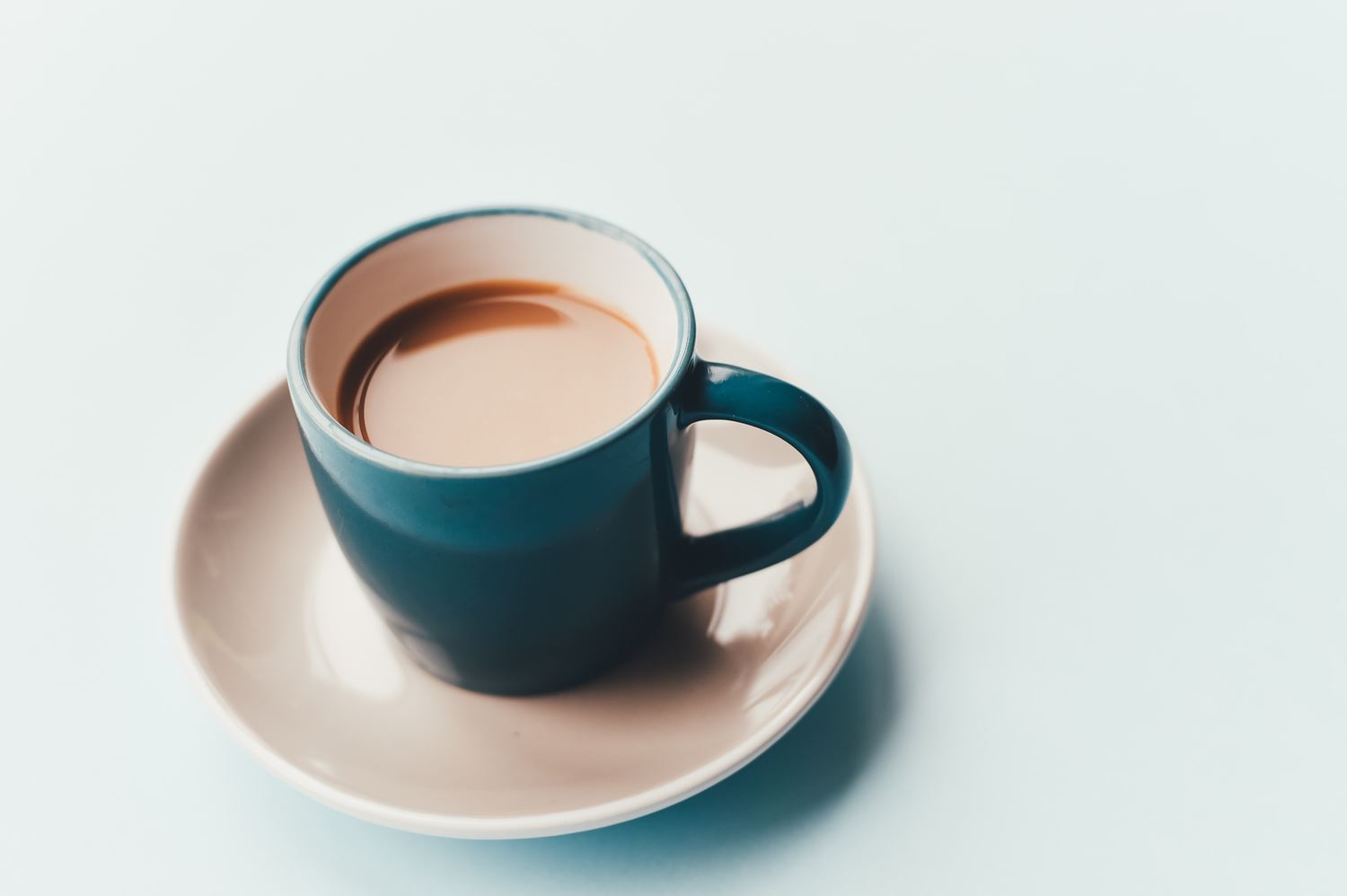 Keeping on the tea theme… 23% of Brits admit to reusing teabags at least sometimes. And we’re not just talking one bag for two cups. No, no, we’re talking about reusing on a completely separate occasion.

This can actually be pretty gross, particularly if you’re not storing your used tea bag in a moist medium as you’re essentially leaving the gates wide open for hygiene issues. Once a teabag gets dried out, it becomes a breeding ground for mould and bacteria.

So, if you STILL want to keep up this pretty unhygienic habit for sustainable reasons, your best bet is to store them in a small shot glass filled with water. Almost one in six Brits keep their bread in the fridge!

And nothing goes better with a cuppa than a nice slice of buttery toast, taking your butter out of the bridge and getting your bread from the… wait, what?! The fridge too?! Well, apparently this would be the routine of almost one in six Brits who keep their loaves refrigerated.

For those that don’t, this habit is mind-blowing… we mean, why else would a bread bin exist?!

And as far as bread-in-the-fridgers go, London is where most culprits live, with 21% of Londoners saying they keep their bread in the fridge. Those most familiar with the bread bin are the Scottish where only 10% of people commit this food crime!

Whilst keeping your loaves cool won’t actually cause you any harm, it will cause a dent in your pocket as this storage method means you’ll end up buying more. The cool temperatures cause the starch molecules to recrystallise very quickly and the bread to stale much faster. Instead, shop-bought loaves should be kept in an air-tight plastic bag at room temperature. A quarter of 18-24-year-olds don’t feel confident in telling whether food has gone off!

On the topic of stale bread and food going bad… we were shocked to find out that a quarter of 18-24-year-olds don’t know how to tell if their food has gone off or not!

Whilst most of us hate the thought of wasting food and are happy to eat certain things past their sell-by date, eating expired food is not without risk. Eating expired foods or foods that are past their best-by date can expose your body to harmful bacteria that can cause vomiting, diarrhoea and a fever.

Here are some ways that will help you recognise if your food has gone bad: When preparing food, 30% of Brits will only occasionally wash their hands and 2% admit that they never do!

Speaking of preparing and cooking food, data from The Food Standards Agency reveals that 30% of Brits wash their hands mostly or sometimes prior to cooking food.

And even more disgustingly, 2% admit to never washing their mitts before doing so. Gross.

Even if you’re only cooking for yourself, handwashing is one of the most important things you can do to prevent food poisoning when preparing food. Your hands can spread germs in the kitchen and some of these germs, like Salmonella, can make you very sick. 58% of Brits would pick up and eat food that they had dropped on the floor, with 11% adopting the 5-second rule…

It appears that people embrace germs in more ways than one, with 58% of Brits saying that they would pick up and eat food that they had dropped on the food…

And it looks like people are living by that old 5-second rule, with 39% revealing that they are happy to consume food that has been dropped up to this magic number.

11% admitted that they’re comfortable with doubling this figure though, eating food that has been on the floor for up to 10 seconds!

It is generally safe to eat food that has been dropped on a residential floor providing that it is mopped or vacuumed once a week, and the chances of anyone getting ill from dropping food on the floor at home are very slim.

However, there are certain foods that are more likely to pick up more bacteria the longer they remain on the floor including cooked pasta, chips, sweets, and buttered toast - depending on what side you drop it on, of course! It also matters what type of flooring the food falls on to, with items dropped on laminate or tiles more likely to become contaminated than those dropped on the carpet. Two in five Brits eat in bed, with Gen Z being the biggest culprits…

And as for where people munch their food, 40% of people admit to eating where they sleep - in bed!

This habit is definitely defined by generation, as 67% of 18-24-year-olds eat in bed at least sometimes compared to 80% of 65-and-overs who stated that they NEVER do this.

And for those that do succumb to this bedtime - or daytime! - food habit, keeping your bed sheet and mattress clean is paramount. Eating on your bed regularly can turn your sleeping environment into a potential breeding ground for bacteria and germs. So, if you are going to do this, you need to make sure that you change your sheets frequently as even the smallest of spills can attract unwanted guests such as ants or other bugs. 39% of Brits are not comfortable sending food back in a restaurant if there was an issue - and 6% wouldn’t even if it was undercooked!

Aside from the mattress-munchers, the majority of people eat their food at a table, whether that be at home or when dining out at a restaurant. But does dining outside of our homes cause us to commit the cardinal sin of food safety, eating undercooked food? Apparently so!

As many as four in ten (39%) of Brits say they would feel uncomfortable sending food back if there was a problem with it. And 6% admitted that they would not send food back even if it was undercooked!

At the end of the day, no one likes complaining but there is absolutely nothing wrong with saying something about food that could be harmful. If you refuse to pay your entire bill because the waiter brought sparkling water instead of still, you’re going to get thrown out of the restaurant - and you’d deserve it, too. But if your meal arrives and it’s half-cooked - especially something like meat or eggs, you should definitely tell the restaurant in a polite and constructive way.

Even if you don’t like confrontation and would just prefer to just push that part of the dish aside, it is important that the restaurant is aware of the situation in order to prevent the same situation from happening to another customer who may not have the fortune of noticing. Eating uncooked meat or eggs has the potential to make you really, really ill. So, if you don’t want to bring it up for yourself, do it for everyone else! Almost half of Brits will ask for a doggy bag to take home leftovers when dining out!

And when it comes to wrapping things up at a restaurant, many people take this very literally. Another unhygienic food habit that a lot of people admit to doing is asking for a doggy bag. 48% of Brits, in fact.

Whilst many restaurants offer customers 'doggy bags' for leftover food, there are potential health risks if it is not stored and handled properly after leaving the restaurant. Temperature control is a key factor in limiting the growth of bacteria in food and, to reduce the risk of food poisoning, it's important that the ‘doggy bag’ is refrigerated as soon as possible.

Beware of the types of food you take home too. If you’re at an Indian restaurant, for example, avoid taking home rice as this is one food that is particularly tricky to reheat. It can get infected with bacteria, which produces toxins that can cause diarrhoea and vomiting. These toxins are also ‘heat stable’, meaning re-heating will not kill the toxins. If you’d like to learn more about food health and safety, we have a wide range of courses and resources on our website to help. From HACCP to food allergies, Virtual College can really save your bacon when it comes to food hygiene.

All data used in this study has been sourced from YouGov and the Food Standards Agency. A full source list can be provided upon request.