RIDDOR stands for the Reporting of Injuries, Diseases and Dangerous Occurrences Regulations, and is a piece of health and safety legislation from 2013. It applies to all places of work in the UK, and affects individuals who are employers, control places of work or are self-employed.

If you are a ‘Responsible Person’ identified above, then RIDDOR legally requires you to record and report certain accidents, injuries and diseases that occur or come from your place of work. Not all workplace accidents fall under the legislation, but it is important that you understand which incidents do need reporting and why this is necessary.

Why was RIDDOR Introduced?

RIDDOR is an important piece of health and safety legislation that allows organisations such as the Health and Safety Executive to keep track of common accidents that occur in the workplace. This data helps to identify where these risks come from and provides the basis for guidance and regulations that prevent injury, ill-health and even death from happening again.

Thousands of accidents happen at work across the country every month, many of which could have been prevented. The introduction of RIDDOR meant that governing departments are made aware of common health and safety issues in the workplace and can implement strategies and regulations that greatly reduce risk.

RIDDOR is also important because it holds employers responsible for the safety of all of their employees. Any negligence or behaviour that puts staff at risk is reported, and failing to do so will mean that an employer is breaking the law.

These regulations lead to much higher standards of health and safety in the workplace, which leads to fewer accidents. Reporting any accidents that do occur also highlights existing risks and stops them from becoming a bigger problem.

What is Reportable Under RIDDOR?

Although death is very uncommon at work, there are unfortunately over 100 recorded deaths related to a workplace incident every year. If a worker or non-worker dies within the workplace because of a work-related accident, it must be reported.

The exception to this is incidents of suicide, which are not classed as a work-related incident under RIDDOR.

Deaths that do not occur immediately, but are still directly caused by a workplace accident, must also be reported. A report may already have been submitted for an employee accident, but if they die because of this incident within one year then it is counted as a work-related death.

Major, but non-fatal, accidents are classed as RIDDOR reportable injuries. The legislation lists these injuries as:

The next category applies to any injuries that lead to the incapacitation of a worker for over seven consecutive days. These injuries aren’t any of the ones specified above, but are serious enough that an employee is unable to perform their usual working duties for a week.

This seven day period does not include the day of the accident, but does include weekends and bank holidays. In this case, a RIDDOR report must be filed within fifteen days of the accident occurring.

Non-fatal accidents that occur in the workplace to non-workers, such as members of the public, are classified as reportable incidents under RIDDOR. However, a report only needs to be filed if the injured individual is taken directly to the hospital from your workplace for treatment.

If they are only taken to hospital as a precaution, or only receive an examination and diagnosis, you only need to record the incident but are not required to report it. If a non-worker is injured in a hospital, a report is only necessary if they suffer from one of the ‘Specified Injuries’ that are listed above.

Certain diseases are specifically caused or made much worse by certain jobs or places of work, and if an employee is diagnosed with one of these then it must be reported under RIDDOR.

The most common occupational diseases listed in the RIDDOR legislation are:

More information about other occupational diseases can be found on the HSE website.

Common dangerous occurrences include the uncontrolled release of harmful substances, explosions or fires, the unintended collapse of a building or structure, and the collapse or serious malfunction of machinery and equipment.

Some workplaces have specific guidelines for what constitutes a dangerous occurrence, such as transport systems like railways, quarries, mines and offshore workplaces.

If your workplace distributes, fills, imports or supplies flammable gas then a RIDDOR report must be filed whenever someone loses consciousness, dies or is taken to hospital to be treated for an injury that has happened in connection with that gas.

Gas engineers are also required by RIDDOR to report any appliances or fittings that they believe could pose a health and safety risk.

If you are an employer, are self-employed or are in control of a workplace, you are classified as a ‘Responsible Person’ under RIDDOR and have a legal responsibility to report all of the above incidents to the Health and Safety Executive. If you fail to report an accident or event, you may be taken to court by HSE or your local authority and risk damage to your business, reputation and earnings.

Cases of death, major injury and dangerous occurrences all require very rapid notification of the incidence, and a RIDDOR report to be submitted in less than ten days. It is always best to respond as quickly and efficiently as possible in the event of a workplace accident, as you don’t want to be caught out by deadlines.

It is also your responsibility as an employer to make sure that whatever hazard that caused the incident is removed or that the risk the hazard poses is minimised as much as possible. If the same dangerous incidents occur over and over again, you could be sued for negligence.

What is a RIDDOR Report?

A RIDDOR report is the formal record of the incident that took place in a workplace, which should only be submitted by the identified ‘responsible person’. If you are an employee or a member of the public you cannot submit a RIDDOR report, but you can make a health and safety complaint to HSE or your company’s HR department.

There are some cases where a RIDDOR report does not need to be submitted, but the accident should still be recorded. Your company should have an accident book in which all major and minor health and safety incidents are noted down, and this must be kept up-to-date and organised so that the details of any accidents can be easily referenced or used as evidence in the case of an insurance claim.

How do I Submit a RIDDOR Report?

Several RIDDOR accidents require immediate notification, which should be done over the phone. In the case of a specified incident or death in the workplace, the HSE Incident Contact Centre must be contacted as soon as possible.

All other incidents can be reported using an online form, which is directly submitted to HSE on completion. You can also download a copy of this form after you have filled it in, which is important for your company’s records.

You will need the following information before filling out a RIDDOR report:

When was RIDDOR introduced?

RIDDOR covers seven different types of workplace accident or disease: death, specified injuries, over 7 day injuries, injuries to non-workers, occupational diseases, dangerous occurrences and gas incidents. If an incident occurs within your workplace that falls under one of these categories, you are legally bound to report it.

Who is exempt from reporting under RIDDOR?

No employer is exempt from reporting under RIDDOR if an incident occurs in their workplace that is detailed in the legislation. However, there are some exemptions where a report is not needed, such as accidents during dental or health work, incidents that take place in a moving vehicle on a public road, or non-worker incidents where no treatment is needed.

Following health and safety guidance in the workplace is vital to ensure that you and your staff remain well and minimise risk whilst you are in the workplace, and RIDDOR policy is there to make sure that this is the case. Not only does the legislation protect your business and those who work there, but it also contributes to greater overall health and safety standards across the country.

By adhering to these regulations, you will help to keep your place of work safe and ensure that appropriate records are kept in the case of any unfortunate incidents. 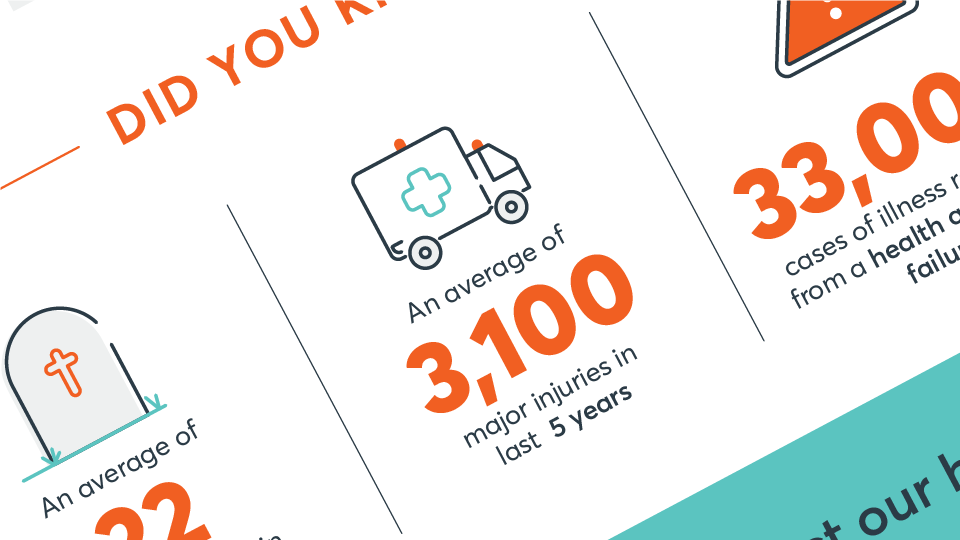 Health and safety risks in the manufacturing sector 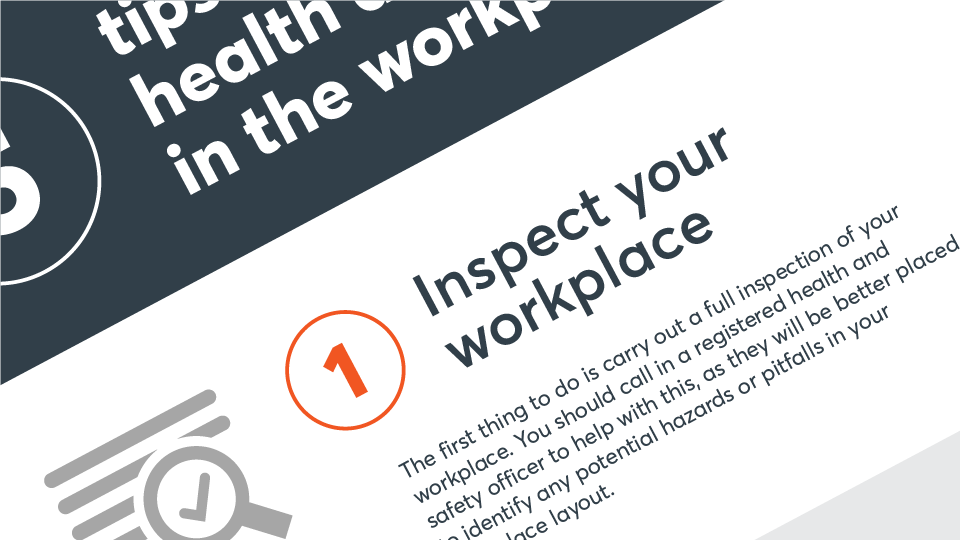 5 Tips for Improving Health and Safety in the Workplace
We understand health and safety can be daunting - it's vast subject, but one that everyone wants to get right. Our simple infographic advises five areas to focus on - give you the perfect starting point for improving your workplace's health and safety. 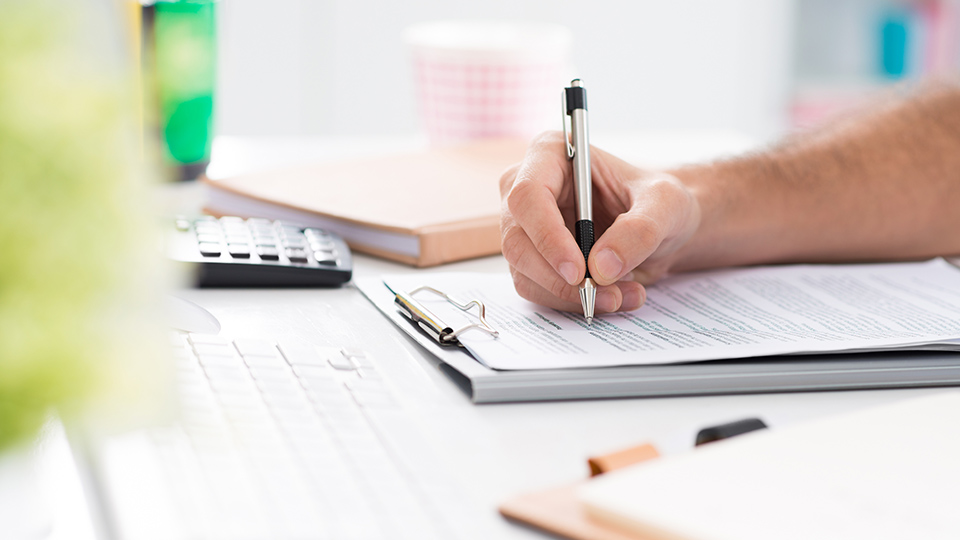 The Cost of Health and Safety
We recently conducted a survey to better understand how much businesses owners value their health and safety procedure, whether they have one in place, and how much the staff are involved. There were some very interesting results.