Falls due to slips or trips remain a significant contributor to the risk of injury and ill health at work. Recent statistics for Great Britain show that slips, trips and falls are the biggest cause of employer reported non-fatal injuries to employees, accounting for 44% of all specified injuries and 24% of injuries resulting in absences from work of more than seven days (Health and Safety Executive (HSE) 2019).

It is estimated that over 1 million working days are lost from such accidents, with numerous major injuries to employees and significant costs to employers. But almost all slips and trips can be prevented, often with simple inexpensive interventions.

Slips happen when an individual needs more friction than is offered by the combination of their footwear, the flooring they are walking on and any contaminant between the two. This is most common during the heel strike phase of gait and often results in a backward fall.

The biggest challenges when trying to prevent slips in the workplace are knowing where to get reliable information on flooring, understanding the ins and outs of cleaning, and knowing how to select footwear.

Not all flooring is slippery when wet. There are many different ways to test how slippery a floor is but only a small number of tests are actually relevant to individual’s slips. HSE recommends the use of the pendulum test, a friction test which recreates the important aspects of an individual's gait. The pendulum is a portable test allowing it to be used when specifying flooring and on site to monitor the slip resistance of installed floors.

Cleaning is often overlooked as the least important aspect of a job. In reality, cleaning is an important task in any work environment. Well planned floor cleaning removes contamination and reduces the risk of slips.

Poorly planned cleaning can increase the risk of slipping and tripping by leaving smooth floors wet after cleaning and introducing trailing cables and other obstacles to the work environment. All organisations should consider how well planned and managed their cleaning is, and whether it is effective and minimises risk.

Footwear selection should be informed by a risk assessment. The GRIP scheme can help services purchasers to find appropriate footwear, using a five star rating system. For low hazard environments One Star or Two Star footwear is a sensible way to protect staff from slips. Where slips are known to occur, Three Star or Four Star footwear will reduce the occurrence of slipping. In the most challenging working environments, Five Star footwear may be necessary to adequately control slip risk. Find out more about GRIP here.

Trip hazards are simple to identify, but are not always dealt with. Trips occur when an individual catches their foot on an object, which interrupts their gait and usually leads to a forward fall. Obstacles as little as 10 mm high can cause someone to trip. They are often the result of poor housekeeping or poor maintenance; an obstacle left in a walkway or a damaged surface standing proud of its surroundings. Trips can also occur over temporary hazards like curled up matting or trailing cables. Where possible, trip hazards should be removed or repaired. Where this is not possible, clearly identifying the hazard with a highlight which contrasts with its surroundings can help people see the hazard and avoid a trip.

For more information on how your organisation and its employees can protect itself from slips, trips and falls we have collaborated with the Health and Safety Executive to bring you three levels of Slips and Trips Training. Find out which one is suitable for you here. 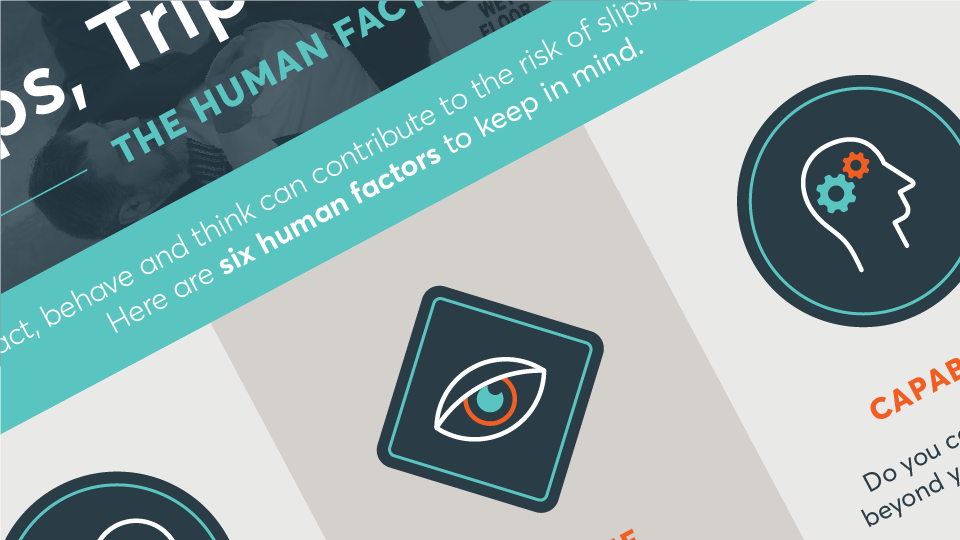 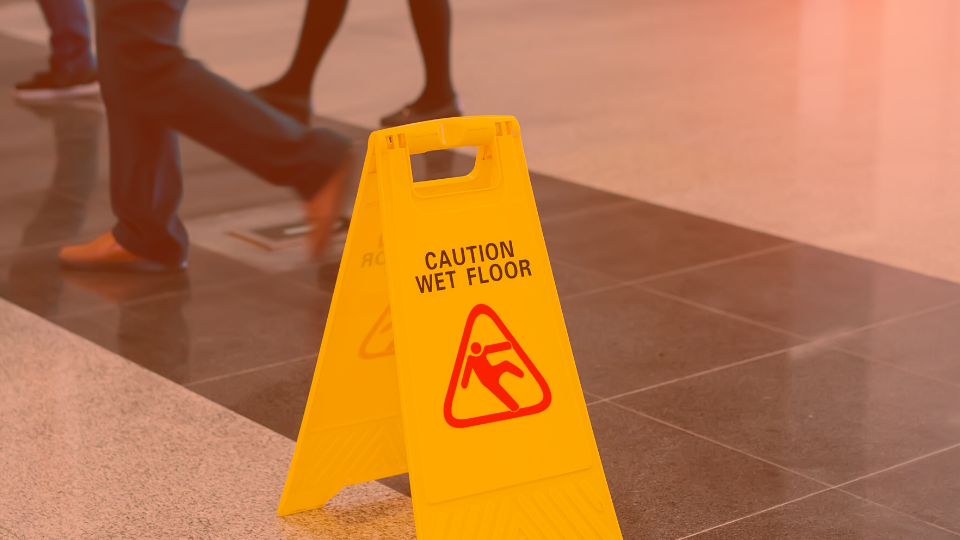 Falls Prevention in the Workplace Webinar in Collaboration with HSE
In this insightful webinar Mark Liddle from HSE and Hayley Khan from Virtual College discusses the importance of staying safe and preventing falls in the workplace. 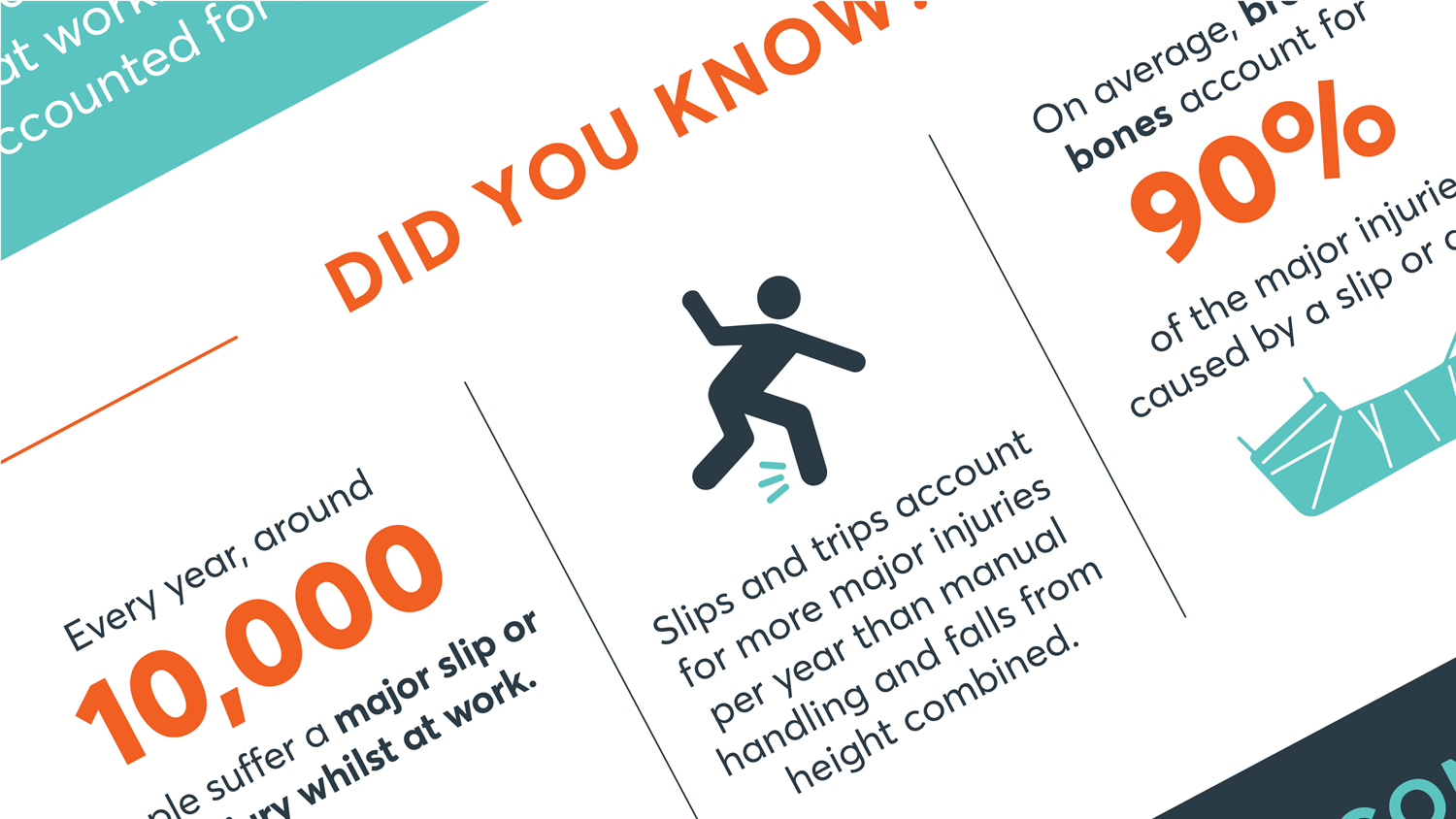 Slips, Trips and Falls Infographic
Slips and trips are some of the biggest causes of serious accidents at work. In fact, between 2018 and 2019, slips and trips accounted for almost a third of all major injuries.